Well, I’m batting one for three so far. During August I had submitted entries to three juried shows. First I got rejected for the Book Arts show in Oregon. I was disappointed, of course. But then, about two weeks later, I got a call saying that two of my pieces, Saraswati :: Saraswati Reliquary and Contemporary Wall Sculpture :: The King’s Garden had been accepted for an for the San Luis Obispo Art Center. The artist reception is October 15 from 6-8, and the exhibit runs through November 13th. As you can imagine, I was thrilled to get accepted into my first show. Now I have to figure out how I’m going to package The King’s Garden and send it down there safely. 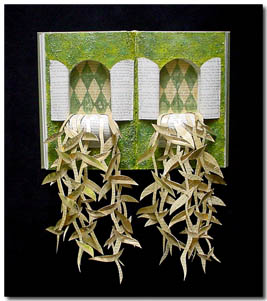 Having been accepted into that show softened the blow of the rejection letter I received the following week from the Roseville Art Gallery. They turned down my three Dia de los Muertos altered books.

Last time I wrote about being rejected for a show, I had so many nice people write to offer their encouragement and support. Thank you all so much for that.

I’m heading to Reno this weekend to watch the Grand Finale of the 2000 Supermoto Bike Series. It’s not exactly my first choice of events to attend, but my son and husband are into that, so I’m going along for the great seafood platter and ciopinno they have at the Atlantis Hotel where we’ll be staying. I’m not the gambling type, but if I can find a $1 blackjack table, I’ll play for hours. Do they still have such a thing??

2 thoughts on “Accepted! and Rejected!”