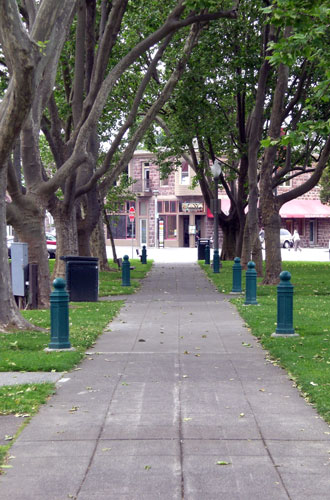 One day last May I met my sister, Kris, at Sonoma Plaza here in Northern California. It was a cool, overcast day–just right for walking, talking and window shopping. We had a great lunch with cerviche-like tacos and margaritas at a wonderful little Mexican restaurant called Maya right off the square.

Afterwards we walked around, stopping in our favorite shops. We visited Chanticleer Books, which is small and musty in that way that old book-lovers adore (or should I say “old-book lovers?) I found a two volume set of The History of Art filled with beautiful engravings, some of which I added to the Angels section of my new web site, Christian Image Source a couple of weeks ago.

We also stopped into the Church Mouse Thrift Shop, which has a lot of really nice secondhand clothing, knick-knacks, and brick-a-brack.

Next we went into Sign of the Bear Kitchenware, which is packed to overflow with a colorful assortment of kitchen and dining accessories and gadgets that you don’t really realize how much you need until they call out to you from their shelves. For example, I can no longer live without my bamboo toaster prongs, used for safely lifting stubborn bagels out of the toaster with ease.

Afterwards we sat in the square and cooed at the baby ducks in the pond and reprimanded the boys who decided to throw sticks at them.

That duckling on the right has a mohawk!

That duckling standing up on the right has a mohawk!

And we watched families having picnics and young dads pushing their children on the swings. Both our husbands did the exact same thing oh-so-many years ago when our children were small.

Soon it was time for my sister to depart, but I had one more stop to make. If you’ve read my post Angels in Olema, you may have noticed that I am enamored with cemeteries. This fascination of mine creeps-out my husband. Here’s a typical conversation when we’re driving around:

Him: There’s no way I’m going into a cemetery!
And then it’s gone.

My sister, on the other hand, is totally supportive. Our conversations go like this:

She: Sure! Let’s go!
That’s just one of the reasons I love her so much.

So I was sad that she wouldn’t be able to join me in my quest to locate Sonoma’s Mountain Cemetery. I had some sketchy directions and headed towards the backend of town, where, totally by accident, I found a tiny, inconspicuous dirt road that led me into the old part of the cemetery.

On the left side were the backyards of houses; on the right side was a row of crypts, dark and moss-covered, shadowed by oaks. My heart skipped a beat: I was in Heaven.

The narrow road took me to a section that was green and lush with overgrowth from our late spring rains.

I had to park the car and walked a narrow path up the hill. This appeared to be a very old section of the cemetery and prime real estate for these old souls. Just look at that view …

I wandered around on top for a while and then headed back to the car. A couple of teenagers were sitting on one of the crypts, legs swinging back and forth. We waved at each other.

I made way back down the hill and came to the newer part of the cemetery. Fewer trees, plastic flowers, lots of shimmering white gravel. Even then, it still held its charm. I found a beautiful crypt of someone named Count Leonardo Guiuseppe Mario Caprione di Montanaro. I tried to find out who he was by searching his name on Google, but nothing came up.

There was a small children’s section, strewn with little toy cars and action figures.

An old man in an beat-up pick-up truck drove in, eyeing me suspiciously. As he stepped out of the truck, I noticed that he held a bunch of flowers in is his hands, which he placed inside an urn. I suddenly felt like I was intruding in his space and got in my car and left.

You can see more of my pictures in the video below or by clicking this link. The song is “Naked as We Came” by Iron & Wine.