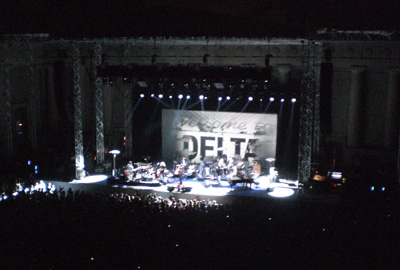 Well, the most exciting thing I’ve done in a long while is I went with my hubby to see Paul Simon at the Greek Theater in Berkeley about a week and a half ago. All I can say is amazing – amazing – amazing!

First off, about two o’clock on the Thursday on the day of the concert, we experienced a little bitty 3.9 earthquake, whose epicenter happened to be at UC Berkeley’s Memorial Stadium, spitting distance from the Greek Theater. Coincidentally, (or not) that stadium is currently closed and being renovated and seismically retrofitted. Good thing too; it was built in 1923 and sits directly on top of the Hayward Fault!

No worries, though. There was no damage from the little trembler and the roads were open and the traffic flowed smoothly to Berkeley as we drove to the show.

I have a love/hate relationship with the Greek Theater. This is the fourth concert I’ve attended there, and as my body ages, it tends to get more aggravated with the concrete-amphitheater-cement seating. Used to be my bottom could fit nicely on one of the painted numbers that doubles for a “seat” in this place. But let’s face it, much of this particular audience is middle-aged, and many of us could use a number just for each individual butt cheek. So we’re scrunched on these cement bleachers, shoulder to shoulder and knee to knee. Heaven forbid if your neighbor has body odor issues or wants to eat a giant hoagie slathered in onions from a plastic baggy. Whatever happened to personal body space?? And forget about being able to lean back; the knees, shins, and toes of the person behind you are what make up any kind of back rest. Maybe I would have been more comfortable if I had breathed deeply and taken in a bit of what the people on the lawn above us were smoking. Thankfully, we came prepared and had our green padded folding seats to use because after two hours, my back would have been screaming.

And what’s up with people talking during a concert. There were two ladies behind us who WOULD NOT SHUT UP! It’s one thing to make a quiet comment to the person sitting next you, via a whisper in the ear. But to carry on a full-fledged kitchen table conversation during an entire ballad?? Why did they even bother paying $75 and leaving the house! I finally asked them nicely to please go somewhere else to talk. Thankfully, they did not decide to kick my ass, and the talking subsided.

So that’s the bad part . . . The good?? An intimate setting and incredible acoustics.

The Secret Sisters were the opening act for Paul. I had never heard of them before, but they were wonderful. Two sisters from Alabama — Lydia and Laura Rogers — with the sweetest, sultriest harmonies, one acoustic guitar, and a rural country sound that is timeless. Here’s a video of them singing “The One I Love is Gone.”

After their set, Michael and I went up to the top of the hill to get something to eat. All of a sudden we heard some applause, and I thought that Mr. Simon was making his way to the stage, but no . . . people were just applauding a second earthquake that had jangled the ground.

We listed to Simon’s first song from above the lawn. You get a beautiful site from up there, as you can see in the picture below. That’s the Campanile Tower to the right and the lights of Berkeley and Oakland in the distance beyond the stage. 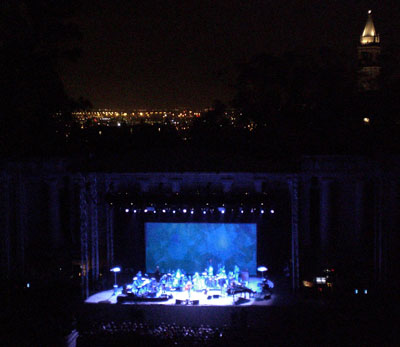 The concert was fantastic. Paul sang songs from his new album So Beautiful, So What and other songs from throughout his 45+ year career. I’ve grown up on his music, so it was great to hear him sing songs from Sounds of Silence (an LP I still own) to Graceland. Highlights for me were when he sang “The Only Living Boy in New York” from Bridge Over Troubled Water, a curtain call of “Sounds of Silence,” with just him and his guitar, and his final song, a poignant “Still Crazy After All These Years.” 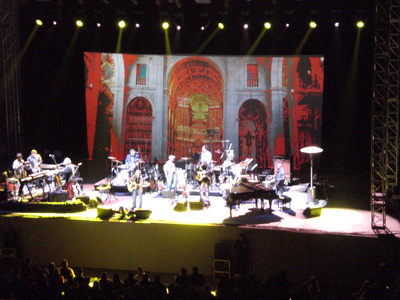 Paul had just celebrated his 70th–YES! I said 70th!!–birthday the week before, so the crowd sang “Happy Birthday” to him towards the end of the show. Sheesh! I hope I can move around that well when I’m seventy! He didn’t say much during the show, but he seemed to be enjoying himself. And his amazingly talented eight piece back-up band sounded so great together. It was such a joy listening to it all.

As I think back on it, I am reminded that Simon and Garfunkel, along with Joni Mitchell, were my inspirations for learning how to play the the guitar and take up songwriting. I will never forget learning how to play “The Boxer” on my guitar. That was in 1969; I was thirteen years old. I was so proud of myself. I just loved that song so much. So I decided to play it for my mom, but when I got to these lyrics:

“Seeking only workman’s wages, I come looking for a job, but I get no offers . . .
Just a come-on from the whores on Seventh Avenue
I do declare, there were times when I was so lonesome
I took some comfort there . . .

My mom freaked out over the word “whores”!

“But did you hear the rest of the words?” I asked her. “They are so great!”
“That word is not a word you should be saying. Isn’t there another song you can sing?” she replied.
I still remember feeling crushed.

Anyhow, thank you Paul Simon, for your incredible, beautiful gifts of guitar, lyrics, and music that you’ve given us throughout the years. I left the Greek Theater feeling overwhelmed to have spent a short time in the glow of your greatness. 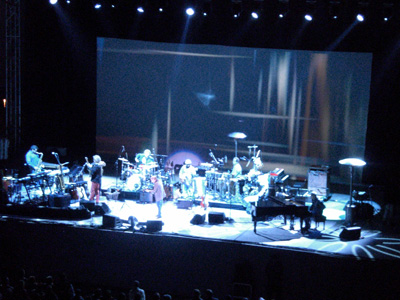 2 thoughts on “Paul Simon at the Greek Theater, Berkeley”